Sometimes when your neck deep in a project you just don’t believe your making much progress. Today I took stock of how much I’v gotten done in only a few hours since being robbed of my wallet.

I have contacted and gotten my information corrected at;

All three credit reporting Cos.

If anyone notices something I missed please tell me so I can get it done quickly.

I went to Mexican DMV today and I needed a light bill and a medical exam, I got the medical exam by a doctor at a pharmacy no problem it is a certificate with a stamp and everything for $8.00.

I thought over my problems with Wells Fargo last night while in bed and this morning I called them back and a modicum of satisfaction. I figured it out somebody at Visa/Wells Fargo decided to automatically change the payment method on the credit cards to catch people unaware of the change so that when the automatic payment was sent to the checking account of the credit card owner there would be an over-draft; causing the generation of a fee for covering the overdraft and transferring money from savings, if there was any, or generating a fee for the over-draft freezing the account and causing mayhem for the account holder(s).

The sneaky bastards are generating new revenue by causing over-drafts by changing their policies and methods of paying their credit cards. Bastards!

I called them back and the service rep. couldn’t reverse the automatic payment, but could reverse a payment that I had made – so I had her do it. I wasn’t the most pleasant person she came across this morning but I wasn’t crude-just curt and to the point. I’ll make another payment later, around the first week of December. There are damn few things I get my way on, but paying bills and keeping the banks/credit card companies on the straight and narrow is one of the joys of my life. BASTARDS! 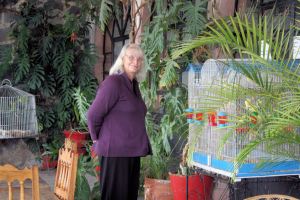 Mexicans love to have birds as pets here I am admiring
some canaries.

Today started as any other day; I finally gave up on my dreams and dragged myself out of bed of course it was in reality a call of nature that got me vertical and mobile, well at least in my stumbling sort of way I made it to the kitchen and poured last night’s coffee into the fake coffee maker to heat and started the kettle. Today I chose to have hot cereal for breakfast and coffee. I turned on the telly to the CNN news station to get my daily sanitized politicized spoon fed version of what passes for news in the U.S.. While spoon feeding myself my breakfast the talking heads spoon fed me the latest news of the financial disaster in my ‘home’ country. The collapse of the mighty Juggernaut of the American economy has had the fascination of a slow motion film of an accident. When will the downward spiral slow or hopefully stop? None of the talking heads knows that is for sure.

I checked my email and found nothing of interest and nothing actually for me just mail from various sites I had an interest in at one time or another. I was poking at the computer when I noticed that the housekeeper and the fix it man had arrived and here I was still in my pajamas and my bed not made. I scrambled about like an I love Lucy production making the bed and gathering my clothes to change into after my shower.

Ha, the shower, yesterday the fix-it man drained the small gas hot water heater to get the debris out of it so it would provide more than a few minutes of hot water for the shower…. no such luck! Now I know that the hot water will run out I am a bit quicker with my bathing procedure and endure the last few minutes of colder water as just something to be put up with to get bathed.

Today I had an appointment with a real estate agent. We talked about my interest in living in San Miguel Allende and what I can afford. As I suspected my meager savings won’t allow much and I will have to live some distance from the center of town if I wish to own property here. We agreed to meet tomorrow to visit some of the listings and get to know some of the neighborhoods to get the lay of the land so speak. The meeting was brief and I found myself out of the office walking along the portal beside the Jardine where I purchased a map of San Miguel as the tourist map that I had did not have much detail outside of the historic area. I found myself at loose ends; to early for lunch and I had, had my breakfast so what to do? I figured I might as well have some more coffee and walked over to Starbucks and ordered a pot of French Press coffee the cost is more but the amount of coffee is greater and you get to use this fancy French Press pot I think it makes one look like your a real coffee aficionado! My encounter with the staff in Spanish was less than glowing; for some reason when at Starbucks I don’t seem to connect with them as well as people in other places. I wonder why?

I choose a chair close to the window where I could see out to the Jardine and the cross streets, lots of folks cross here which amuses me to watch and wonder about their comings and goings. A nice lady asked to share the seat opposite me and I welcomed her company. She was having her coffee and reading what looked like her mail. I later asked her how long she had been in San Miguel. She said she had been there a year and loved it. I told her about my plans to look at houses for sale and that I was thinking of moving to town. We discussed her situation; she rents and is quite happy with her casita. Which is close to downtown not to far from the activities of the town center. We found out that both of us had lived in Kentucky and her son and grandchildren live in Boston, I resisted saying “what a small world”.

After we parted company I thought maybe “if” I decide to move to San Miguel I would be wise to rent a place first so in case this life in Mexico was not for me I would not be tied down with a house that might not sell for a year or more.

I later went to the bank to use my debit card from Wells Fargo the bank machine wouldn’t allow me to use it. I had called the bank before I left Texas and told them my plans and that my card was running out and I hadn’t received my new card. The nice folks assured me that the card I had would be valid to the end of the month, well guess what it isn’t! This could have been serious, however being a doubting old bi** I had brought sufficient cash with me; “Just In Case” something like this should happen and it did happen, grumble, grumble, mumble, mumble :

So after the disappointment at the bank machine I returned to the apartment and made lunch a ham sandwich and a beer the beer tasted so good I had two. The sandwich wasn’t bad either 🙂
The fix it man is hard at work fixing and repairing all sorts of things around here as with any property there is a a constant need to fix or replace something and with the constant use of these apartments as short term rentals there is always something that needs to be done.

I went to my meeting with my Spanish tutor this evening. We met at a local restaurant and I feel that we had a productive session. With help I talked with her in Spanish for an hour and a half. There were rough spots where I couldn’t recall a word or I had the tense of a verb incorrect at times I didn’t know how to express myself and need assistance to complete a thought. How ever the overall feeling I had was that I was communicating in Spanish about everyday things and telling a story about what I did in the past.